UNIO – EU Law Journal is an open access online peer-reviewed journal with a blind review system. It falls within the scope of the Jean Monnet Chair entitled “Citizenship of Rights: European Citizenship as the Fundamental Status of Nationals of the Member States” and is scientifically supported by the Centre of Studies in European Union Law – CEDU (www.unio.cedu.direito.uminho.pt), University of Minho, Portugal.

UNIO aims to publish texts with a significantly advanced understanding of European Union law and to enhance the production of knowledge in this area. UNIO accepts original articles written in English that are not under consideration elsewhere at the time of submission. As an online bilingual review (English/Portuguese), the author may choose to publish the selected text in both languages as long as the author provides the translation into Portuguese or undertakes the cost of translation.

This journal is, to the best of our knowledge, the first bilingual (English/Portuguese) journal of EU law, and one of the first Portuguese law journals governed by international standards of academic credibility, such as a peer-review system. It will, therefore, contribute to enhancing the quality of Portuguese academic research in European Union law and to promote the exchange of ideas and knowledge among researchers of different nationalities. As an open access online journal, it will have a great impact and serve as a useful tool for academics, students and other professionals in the legal field. 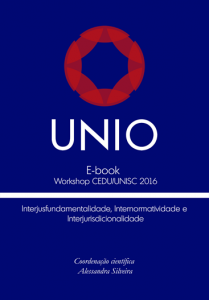 In the framework of the Jean Monnet Chair in European Union Law, UMinho’s Centre for the Study of European Union Law (CEDU) published an e-book resulting from a partnership with researchers from the University of Santa Cruz do Sul – UNISC (Rio Grande do Norte, Sul, Brazil) who have associated themselves with local researchers for a transatlantic dialogue on the virtuosity of the theory of inter-constitutionality – both in defining the identity of European constitutionalism and in updating the theory of constitutionalism in general. There has been a debate on the development of a new methodical method capable of capturing the crossed schemes of cooperation, with overlaps and tension provided by the interjusimportality, inter-consistency and interjurisdictionality within the framework of pluralistic and multilevel constitutionalism.