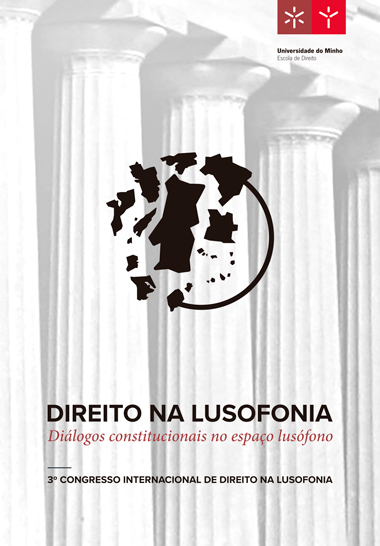 Editor School of Law of the University of Minho
Author(s) Mário Monte, Maria Clara Calheiros, Maria Assunção Vale, Anabela Susana Sousa Gonçalves
Year 2016
Availability for download
Synopsis This work results from the collection of communications presented at the  School of Lawof the University of Minho on 18, 19, 20 and 21 May 2016, to the third edition of the International Congress “Law in Lusophony”. The congress, whose scope is to allow the broadest and most transverse discussion of current legal issues among jurists throughout the Portuguese-speaking world, is associated with the commemorations of the fortieth anniversary of the Constitution of the Portuguese Republic of 1976, adopting as its general theme “Constitutional Dialogues in the lusophone space “. Indeed, this framework could not be more appropriate for a debate on legal issues in the Lusophone area. We can not forget the existing relations between the present Constitution of the Federative Republic of Brazil and the Portuguese Constitution of ’76, as well as the role of this and the political transformations it has translated, in opening the way to a new political and juridical reality in geography of Lusofonia. The communications collected come from the most diverse points of the community of Portuguese speaking countries: Portugal, Brazil, Mozambique, Angola, Cape Verde, S. Tomé and Príncipe, East Timor, Macau.